Two very special awards are granted to those who have significantly contributed to the advancement of the goals and objectives of the California Surf Lifesaving Association. Recipients of the Distinguished Honor Roll and Life Membership awards receive framed certificates.

The CSLSA recognizes Scott Hubbell for over three decades of personal service to the lifesaving community and through his company Scott Hubbell Productions. His success in finding sponsors for the CSLSA Regional Competition, in securing funding for various water safety and lifesaving programs, including the Junior Lifeguards, has had a significant impact on the professionalism of California's lifeguard agencies. The CSLSA honors Scott for his leadership and support by presenting him with their first Distinguished Honor Roll Award.

As webmaster of the CSLSA website for over sixteen years, Pat does more than just post updates. Utilizing her educational background, she polishes the content, organizes pages for clarity, and visually presents our message with simplicity. She has also donated a considerable amount of money over the years as she believes in our goals and objectives. The CSLSA honors Pat for her dedication and support by presenting her with the 2011 Distinguished Honor Roll Award. 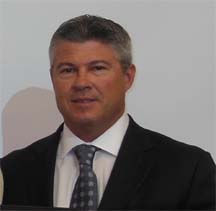